Tropical Shipping is committed to providing the highest levels of service, security and efficiency that our customers have come to expect.  As the premier carrier to and from the Caribbean, we partner with Horizon Lines for service between the northeastern United States and Puerto Rico, where cargo destined for the Caribbean is transshipped onboard Tropical vessels and carried to its final port of discharge. 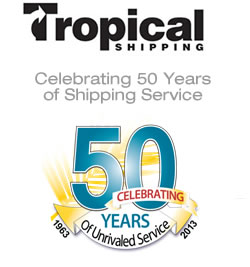